I found myself hopelessly addicted to the third Ar Tonelico game this week - after receiving it on Friday last, it dominated my weekend almost entirely (helped by the rain that tumbled down almost the whole time). When I was younger it was almost a matter of routine to plow six or so hours into a gaming session but that has become much less frequent these days. However, that was exactly the manner in which I found myself playing the first 20 or so hours of Qoga - in three or four marathon sessions because I just couldn't put it down.

The combat system is really quite addictive; there are so many things to keep an eye on while fighting that it never becomes mundane and unleashing a powered up attack from your Reyvateil support can be quite spectacular. Add to this the Item Creation system, which yields quite practical rewards in the form of super moves and updated weapons; along with the Dive System, which literally allows your character into the mind of one of your Reyvateil companions in order to improve and aid their mental state by completing such bizarre things as giant board games or classic RPG tributes.

I also found myself playing a few hours of Agarest Senki (Record of Agarest War) after a long break (since May last year, according to the save data!) Initially I found the going awkward but finally got into a bit of a rhythm and spent quite an enjoyable time with the game. The generous serving of free DLC certainly helped, bringing some nice items and power ups along with bonus dungeons to explore. Last but not least is the 360's Infinite Undiscovery, released prior to Star Ocean: The Last Hope and sharing this same engine, along with a similar play style; It's pretty much Star Ocean in a straight-up fantasy setting. This game doesn't seem to get a lot of love and it's one of the few 360 exclusive RPGs from Japan that was never ported to another system.

It has some nice features that set it apart from some of its contemporaries: battles are enjoined on the same screen - no touching an enemy then waiting for the battle screen to load - and there's a feel of "seamlessness" to the towns and areas as there's virtually no load time when entering buildings, etc. In addition there's the usual Item Crafting system to help you make weapons and become stinking rich. Each character has a different trait that must be leveled up to allow for more advanced crafting, so there are certainly rewards for persevering. Posted by James Mason at 7:30 AM No comments: Links to this post

Continuing the theme of picking up titles I'd not played for months or years, I finally went back to the Sega Saturn RPG Madou Monogatari, which I'd put down in 2009 (according to the save file) and not been back to since. 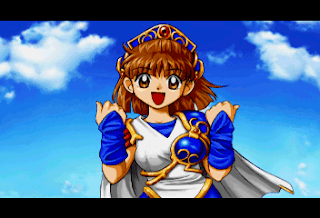 Madou Monogatari (Sega Saturn) from 1998 is the last in a long running series that began in the late 80s on the MSX (although a mobile-only game was released in Japan in 2005). For anyone interested, Hardcore Gaming 101 covered the series as part of their overview of the Puyo Puyo games. 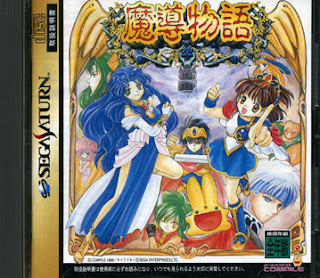 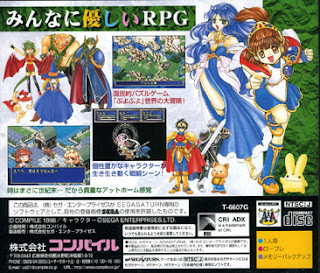 The game is a pretty standard RPG, featuring turn-based battles using a party of up to 3 characters (typically 2 story characters plus a guest). The heroine, Arle, uses only magic attacks but all other characters have some combination of physical and magical abilities. Some enemies are resistant or boosted by certain types of magic, so the player needs to be careful to remember their foes. 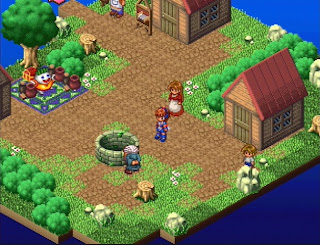 The game is generally presented in an isometric layout, whether in town or in a dungeon, while battles are shown side-on with nice looking 2D sprites. Conversations are overlayed with large, nicely drawn portraits of the characters to bring some life to the scene. The overworld view is simply a map with dots representing areas your party can visit; clicking on a location will send you straight there. 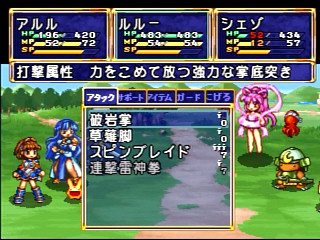 Each character has an SP gauge that, when full, allows them to use a special skill (grayed out when the SP bar is not flashing, as seen in the screenshot above). These skills can prove very useful against stronger enemies and bosses. The SP gauge will drain even if the player opts to use a normal move - however that move is significantly boosted in power and effect.

I'm about 4 or 5 hours in at the moment and so far it's been an enjoyable romp. The characters (and even most enemies) are packed with charm making this a good RPG to play when you don't feel like being hammered by a typical story centering on the end of the world.

As far as the series goes, I've only played this Saturn version and the SNES title Madou Monogatari: Hanamaru Daiyouchi Enji - out of the two of them, I'd definitely recommend the Saturn game - Hanamaru Daiyouchi Enji is really more of an RPG-lite type game, seemingly aimed at children. It does, however, boast the advantage of having a fan-made English translation patch available.
Posted by James Mason at 12:18 PM No comments: Links to this post

In an effort to re-connect with some RPGs that I'd let pass me by, I endeavored to dust off some of my more neglected titles, namely: Blue Dragon (360), Atelier Iris: Eternal Mana (PS2) and Mana Khemia: Alchemists of Al-Revis (PS2). 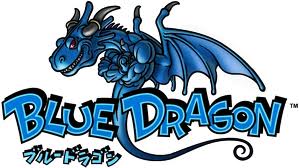 I'd abandoned (or at least lost interest) in Blue Dragon about 10 hours in, so I wasn't expecting much when I fired it up again for the first time in at least six months. How wrong I turned out to be though - I was quickly caught up in the action and, three hours later, and to force myself to save and take a break.

I remember the opening to the game being fairly slow, without a lot of story to get your teeth into but, by the time your party is escorting the population of your village to safety, things start moving at a decent pace and it feels like the game starts to come to life. I think I'll be putting some more time into this one after all. 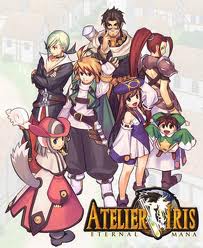 Embarrassingly, the only reason I'd put Atelier Iris down in the first place was my own amazing ability to get lost. It took watching a video of the relevant section before I finally realized what I'd missed (a small pathway obscured by trees) and then I could finally get back into a game that I'd been enjoying up until that point.

I quite like that the regular RPG combat system that has been spiced up with Alchemy elements - creating attack/healing items on the fly is quite a nice touch - but it would have been nice to have more than three active characters in battle.

The world itself is made to feel quite large as you're forced to walk long distances between settings and there's a good amount of variety in terms of the enemies you battle. There are also rewards for finding the many (many!) items available as well as side-quests focusing on the Alchemy side of the game.

I've spent quite a bit of time with Atelier Rorona (PS3) which as a traditional Atelier game focuses mainly on item creation and running a shop, so it's nice to see those elements added (in a slightly watered down fashion) to a traditional RPG style game. 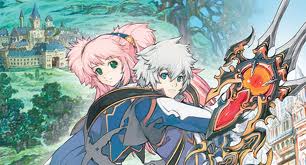 I gave Mana Khemia: Alchemists of Al-Revis a try due to it being a part of the Atelier series but with a few new twists. The most significant is that the setting is a high school (well, the Alchemy version of one, at any rate) much like in Persona 3/4, which changes the focus from wandering the world to things like relationships with other students/teachers and attending classes/completing assignments. While much of this is just another way of setting up fetch/create quests like in most of the games, it still feels a bit weird to be signing up for classes and completing homework...

I've only had a quick look at this one, but one highlight (for me) so far is the strong Seiyuu lineup, featuring actors very familiar to Anime fans such as Nonoka Ai, Satou Rina, Kawasumi Ayako and Nogawa Sakura. A nice touch and one that suits the setting of the game completely.

In terms of polish Mana Khemia doesn't feel like much of a step up from earlier PS2 titles but that's not really the aim of this sort of release, is it? The characters I've met so far seem to be reasonably strong and fleshed out, so hopefully they, along with the story, are enough to keep interest levels high through the various item creation quests that no doubt await me.
Posted by James Mason at 12:36 PM No comments: Links to this post

RAGE: Making Of The Enemy

Tags: GameTrailers.com, RAGE - Making of the Enemy, PC Games, PlayStation 3, Xbox 360
Posted by James Mason at 5:28 PM No comments: Links to this post